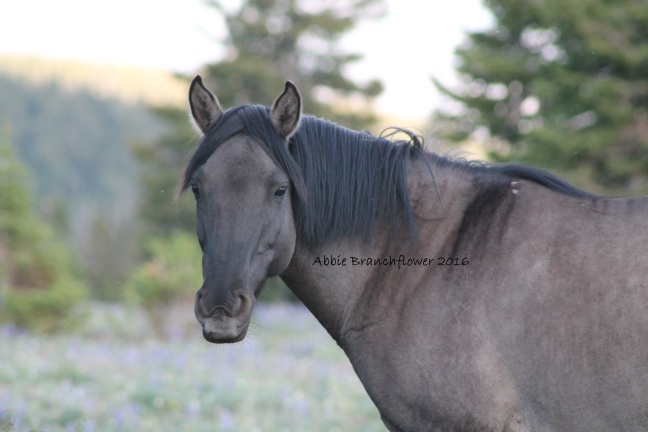 As anyone who has been to Graduate School can attest, the Grad life is a busy one! I’d love to be able to post a weekly blog post, but to keep these posts more on the manageable side I thought I’d throw in some short horse profiles. I know lots of people have done profiles on the horses, so I will likely focus on my own experiences with these individual horses.

Of course, even just choosing one horse to focus on is tough! I picked Demure to start, because I’ve always found myself drawn to her. Not to mention, she seems to love to pose for me!

Demure was one of the first horses I “met” on my initial trip up the mountain. I was thrilled-and took tons of photos of her-wondering if I would get another chance to photograph her. As it turns out, that wasn’t a problem! But no harm done-I love those early photos.

Demure’s has been in Horizon’s band since Spring 2015. This year I noticed her showing preference towards satellite stallion Fiesta, much to Horizon’s chagrin! Demure seems to really like Fiesta, and I found myself hoping the two of them could pair off. However, Fiesta did not appear interested in creating a disruption in the group.

Demure only has one living offspring on the mountain. Though he started off on the small side, Mandan is growing into an impressive colt, and I have high hopes for him as Demure, and Santa Fe’s, only wild offspring. 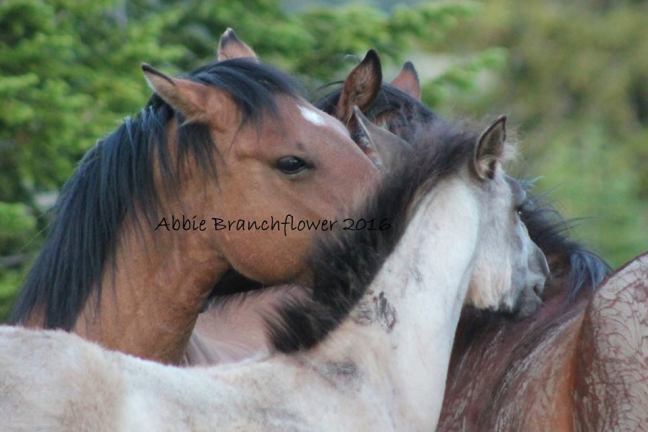 One of my favourite aspects of watching the horses is observing the bonds between individuals. Whether it’s interactions between a stallion and his band, long-term friends, dams and offspring or bachelor buddies, these quiet moments are what truly stick with me when I come home. As it was recently Valentine’s Day, I thought now was an appropriate time to expand on the relationships among the horses.

If you follow my Facebook page, you might remember that I shared a picture of Tecumseh and Galadriel for Valentine’s Day. These two are one of the most rewarding pairs to observe. Tecumseh fought long and hard to get Galadriel back after he lost his band and, it seems clear to me, that he hasn’t forgotten that struggle. Tecumseh is incredibly tender with Galadriel, he dotes on her and absolutely adores Oceana, their daughter. While I was sad to see precocious Oceana leave her parents relatively early (she really was the apple of their eyes!), Grijala is doing a good job of taking care of her. For such a large stallion, he is supremely gentle with the filly. His mare, Graciana, has also taken Oceana under her wing.

Fiesta and Horizon are another well-known pair. These two were bachelors together, and when Horizon claimed Juniper as his first mare, Fiesta tagged along. Up until this fall the two stallions remained together, with Fiesta as a clear lieutenant stallion but part of the band all the same. The roan stallion took his duties very seriously, and rushed to defend his little family at every opportunity. Fiesta has not been seen in recent months, though I am hopeful that he has simply decided to go his own way and will show himself in the spring!

Firestorm is one of the most prolific young mares on the mountain, though sadly she only has two offspring currently on the range. She is a fantastic mother, and her sons and daughter have all inherited her kind and affectionate temperament. Okomi recently became a bachelor but over the summer Firestorm was still as affectionate as ever with her son, and from the pictures I saw this fall, Okomi doted on little sister, Quietstorm. Okomi was also an excellent ‘stepbrother’ to Petra.

Pride is another wonderful big brother. He and little sister Quartz (Quintana) were seldom apart this summer, though I’m not sure which of the two was the leader in most of their adventures (though I think it was Quartz!)

With the implementation of PZP (fertility control in order to curb population growth) it has become less common to see multiple juvenile horses in one band. Orielle and her dam, Inoccentes joined Blue Moon’s band in the fall of 2015. When Halcyon’s son, Quanah was born the next year all the horses in the band doted on the baby. Orielle and Quanah have a really fun relationship, and it was a daily occurrence to see them tearing around together, having a blast. 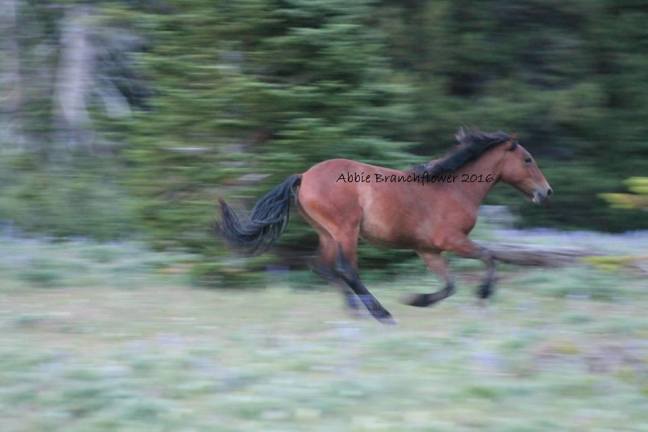 It’s hard to talk about relationships on the mountain without mentioning Nimbus and Knight. While it was certainly a rocky start for the two young horses, Nimbus has clearly come to trust Knight and the two are very sweet with each other. Nimbus may appear quiet, but she certainly keeps Knight on his toes! 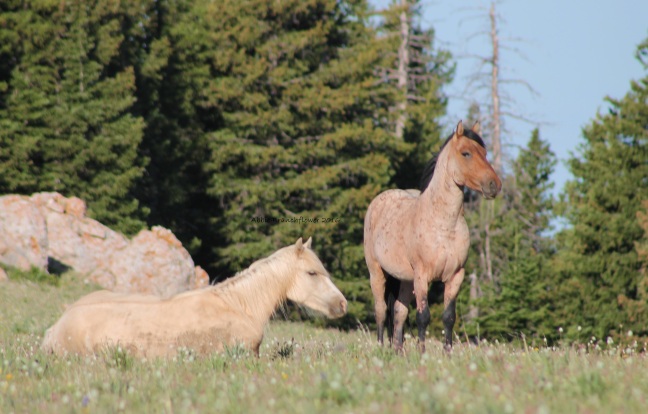 While relationships among stallions and mares generally get the most attention, mares in the same band often form strong, lasting bonds. When Doc took Jackson’s band, all the mares stuck together, in spite of many of them seeming less than pleased with Doc, who, to be fair, had a very different attitude towards them than Jackson did. A few years later, the band has started to break apart, but this summer they were still a very close knit group. Doc can be a dominant stallion, and oftentimes the other members of the band would get between him and a mare he was courting if that mare showed signs of being uncomfortable.

I don’t think it’s an exaggeration to say that family means the world to wild horses. As social, herd animals, family is everything: social bonds are what keep them safe and allow them to exhibit their full repertoire of natural behaviours.  When considering management strategies, whether they be a form of fertility control or removals, I think it is very important to remember this.  While management of mustang herds is currently unavoidable, it is imperative to take into account social disruption when evaluating the impactx of various management strategies on the horses. Sadly, there is by no means a perfect solution, though tools such as PZP are promising, so long as we implement these strategies carefully. It is important that we continue to explore methods of minimizing social disruption to the horses while we manage the herd.